I was privileged to watch the story of a "male domestic help" in pre & post-civil rights America and was pleasantly captivated by the various themes and events that unfolded throughout the main character's life. Themes like pain and anguish, love, dignity and pride in honest labor, forgiveness, estrangement, loneliness, fear, oppression, hunger and a thirst for justice cannot but keep you mesmerized in the darkened cinema hall, but then you have to pinch yourself and remember that when scenes looked bad, they were probably worse in real life without the glamorous Hollywood trimmings (which make us come to see these motion pictures-to be honest) and when they looked good, we can only hope they were really better.
Those who know me know that I personally believe in a gospel of love (not fairy tale ideas nor Hollywood's romances but in self-sacrificial love made up of all the hard and uncomfortable stuff that lets others know they are valued and important and stand the test of time be it towards family, a friend, an acquaintance, a neighbor, a child, a stranger.....anybody).  I'm happy to say I saw true love evident in this film and I think this love made room for a very important forgiveness that in a way brought the film to its nearly perfect end (if anyone's life could be called so).

Take home message: Try to make a difference no matter how small wherever you find yourself and if you must speak out/up for someone else do it with and in the name of love. When we fight for what we believe in, we are always on the winning side and God for His own part knows how to balance the scales adequately, maybe not in your lifetime or generation, but at the right time. Honest, diligent and well-executed labor will only earn you respect (and hopefully reward).
Have you seen this movie? Any thoughts?
Posted by Unknown at 5:20 AM No comments: 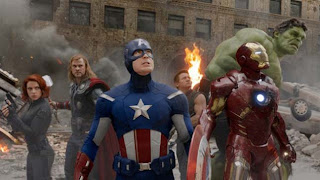 WARNING: Do not read this blog if you plan to but are yet to watch the movie, The Avengers. I will not be held responsible for spoiling the film for you.
This morning I read from the books of James (chs.1&5) and Wisdom 7 and both readings esteemed wisdom and encouraged us to ask for both wisdom and understanding earnestly. Last night I saw the Avengers with my new roomies and friends and as you know, it was packed with superheroes (Captain America, Iron-man, the Hulk, and Thor). I thoroughly enjoyed the film but then it made me think of a talk I had listened to earlier in the day on "Theology & Cinema" by Antonio Sinneo (I think I spelled that last name wrong) who spoke of how being in a darkened room and facing a brightly-lit movie screen literally made him feel like he was viewing "the light at the end of the tunnel" and in ways he couldn't verbalize well enough drew him closer to "The Divine". Antonio went on to say that we complete the movie experience only when we dialogue with it, i.e. talk back to the film because, in its own way it is relaying a message to you and you have a duty to express your own opinions as you would when having a healthy conversation. No, he doesn't mean sit back and start talking to a blank screen when the film is over, but rather get a friend, dessert and coffee (or whatever your preference may be) and discuss your reaction(s) to the movie.

Coincidentally, I happened to visit the Cinema on the same day and I thought I would take the opportunity to talk back to the film, The Avengers and maybe be even go as far as tying it into my scriptural reading for today. I hesitated on this thought because I anticipated a lengthy conversation considering the movie was 143 mins long plus, I hadn't thought of anyone who would engage me in such dialogue, so I picked up my journal and put pen to paper and then instantly, a light bulb came on and I thought maybe this would be a good subject to blog about and hear what reaction(s) other people have about the latest superhero film.

If I had to look at the movie analytically, I  would start by addressing the theme of "power"﻿. The movie showed a great display of power (force) and a desire/hunt for it whether it was for good/evil intentions. Take Loki for instance, he was more concerned with having people bow down and worship him and that drove him to find the most powerful source of energy (The Tesseract). The government on the other hand wanted that same source of energy to build weapons of mass destruction (WMDs). The movie shows how desperate both parties were to have their hands on The Tesseract and I wondered why. One explanation that came to my mind was INSECURITY. Loki was jealous of his brother Thor (a demi-god) and somehow thought that if he had the ultimate earthly power, his brother, who was from another realm would be subject to him together the mortal earthlings. The govt on the other hand just wanted control and to always be in the advantage. This brings to mind something Mr. Antonio mentioned in his talk yesterday "control last for a moment but conversation and dialogue last a lifetime".

Another theme I encountered in the movie was "divide and conquer". Loki tried to turn the superheroes and the other good guys against one another  but more specifically against their director (Fury) by planting seeds of suspicion and doubt in their minds. It makes me think of my reading from James 1 this morning where the apostle implores us to ask us for wisdom but to do so in faith because if we doubt, we are like waves tossed on the ocean by the wind, i.e. not being of one mind. The film clearly showed that when disunity arises where people should be working towards a common goal, there is chaos and confusion and all of a sudden what started off good turns into a mess. Take for example, former British colonies in Africa, but that's subject for another discussion.

One more aspect of the Avengers I would like to discuss here is the case of Dr. Banner (The Hulk) whose weakness was really his strength. The man, Dr. Banner knew that when he trnsformed into the Hulk, his rage was relentless and at times, he did more harm than good, so in an effort to tame his inner beast (no pun intended), he moved himself out of a society that provoked him enough to constantly unleash The Hulk and went to render health services in a third world country which in my opinion was an excellent illustration of wisdom in practice and also self-mastery (if it is possible).

If you could "talk back" to the movie, Avengers, what would you say? Thanks for reading :)
Posted by Unknown at 12:25 PM 3 comments: